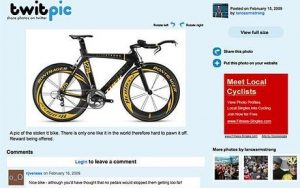 Lance Armstrong offers reward for return of stolen time-trial bike…Cycling legend Lance Armstrong is offering a reward for the return of his custom-made time-trial bike after it was stolen from his team truck.
The seven-time Tour de France winner posted an appeal along with a picture of the bike on his Twitter page.
He wrote: “There is only one like it in the world therefore hard to pawn it off. Reward being offered.”
The bike was stolen from his Team Astana truck outside the team’s Sacramento hotel.
It has distinctive yellow-and-black wheels and the logo of Armstrong’s Livestrong foundation.
Armstrong also wrote in his Twitter diary on Sunday morning: “Whoa!! They just came to my room and said our truck was broken into and someone stole my time trial bike! Wtf?!?”